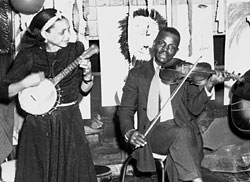 Will Batts’ starts his “Cadillac Baby” with the last line from Blind Lemon Jefferson’s “Booger Rooger Blues” — “Somebody learned my baby how to shift gears on a Cadillac Eight!” This classic acoustic blues was recorded during the height of American car culture, when gas was cheap and car radios were new. With gems like this, Will Batts helped lay the groundwork for the rock ‘n roll music which would pump through millions of car speakers in later decades.