BACK TO FREE MUSIC LIST
Vaudeville Blues | Public Domain 4U

Ora Alexander – “You’ve Got To Save That Thing” 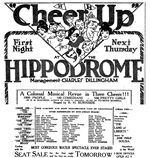 Ora Alexander was a blues singer and Vaudeville performer who recorded for Columbia Records in the early 1930’s. “You’ve Got To Save That Thing,” one of her better known tracks, is a definitive slice of the Vaudeville Blues genre. The performance just plain rocks, with raw accompaniment in the barrelhouse style, and a blistering vocal that would bring the house down in any nightspot today. Judging from the hoots and hollers, those present at this recording session couldn’t contain their enthusiasm! Well neither can we.