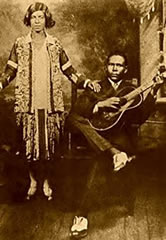 This great song was written by Memphis Minnie and Kansas Joe McCoy a year after the Great Mississippi Flood of 1927. It has since been adapted and recorded by Bob Dylan and Led Zeppelin and many others. Dylan’s adaptation appeared on the recording “Modern Times” in 2006. Led Zeppelin included a version of this song on their fourth album, Led Zeppelin IV. Memphis Minnie is credited for her lyrical contribution on this very popular song.

Chicago bluesman Joe McCoy had a lot of stage names. Best known as Kansas Joe McCoy, he also performed and recorded as Georgia Pine Boy, Hallelujah Joe, Hillbilly Plowboy and Mud Dauber. Joe was married to Memphis Minnie (who’s real name was Lizzie Douglas) and they made this classic record together in 1929. Here’s the timeless original, hot off the 78RPM vinyl.